COVID-19 impact on e-commerce in Denmark

About the data:
The data behind the following charts originate from +40 Danish e-commerce companies. The data are normalized, meaning that all of the companies hold the same weight. The charts show index numbers and thus the development in percentage for a range of metrics compared to the same day last year (2019). The data has been corrected for weekdays, meaning that data from a Monday is compared to data from a Monday.

Press conferences with the Danish Prime Minister have been highlighted on the charts to stress the direct effect on Danish e-commerce. 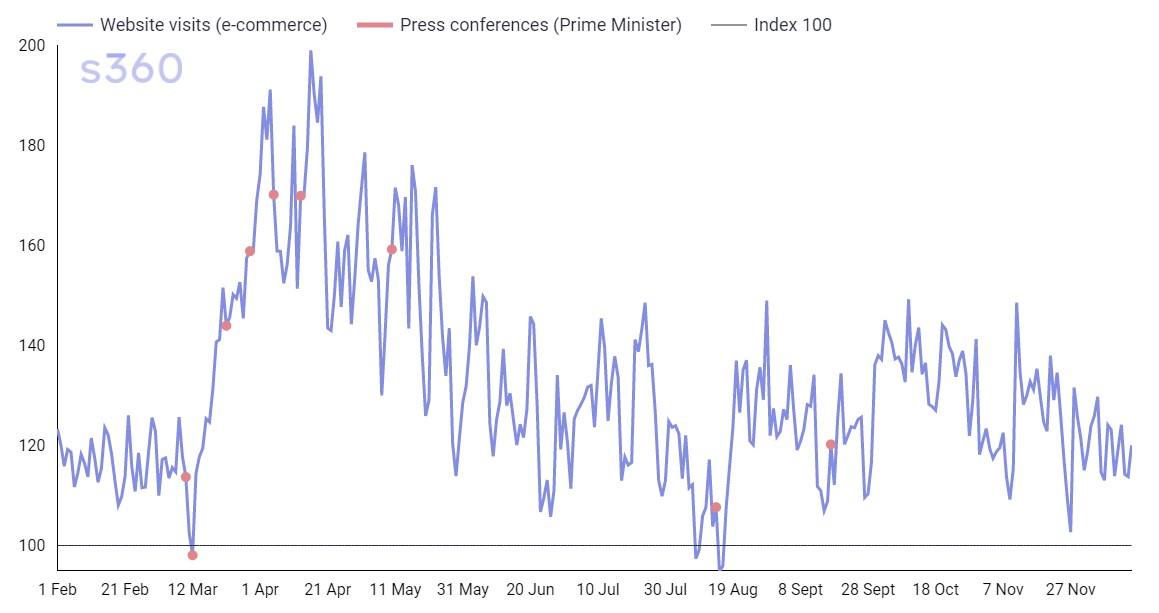 If we look at the period from February 1st 2020 to the day before the Prime Minister’s first press conference (March 11), the number of visits to Danish webshops were stable and above last year, with an average year-over-year increase of 16% throughout the period. At the beginning of 2020, Danish e-commerce experienced substantial organic growth, but after the Prime Minister’s first press conference, the number of visits experienced explosive growth and is now about 65% above last year. 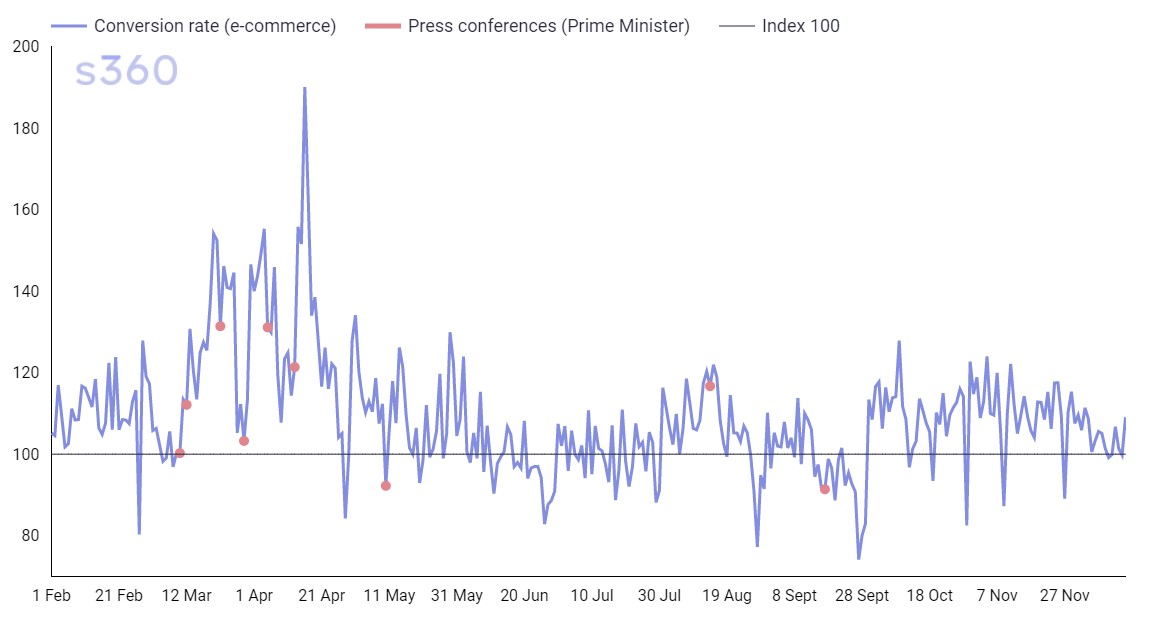 The consumer’s journey from consideration to purchase has been significantly shorter since the first press conference. This conclusion can be drawn by looking at the conversion rate. The conversion rate is an expression of the share of visitors making a purchase when visiting a webshop. 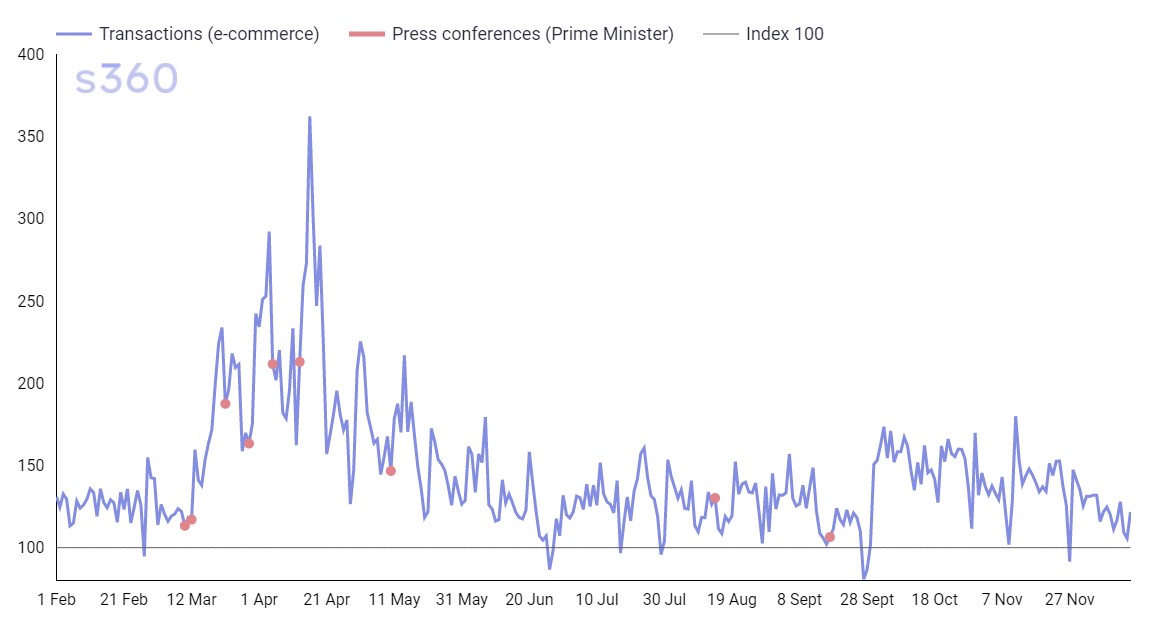 If we look at the period from February 1, 2020, to March 10, 2020, we find that the number of orders placed at Danish e-commerce companies is generally significantly higher compared to last year (Average 19%).

After the first press conference, a combination of more visitors and an increased willingness to make a purchase among consumers made the number of online orders more than double compared to the same period last year. 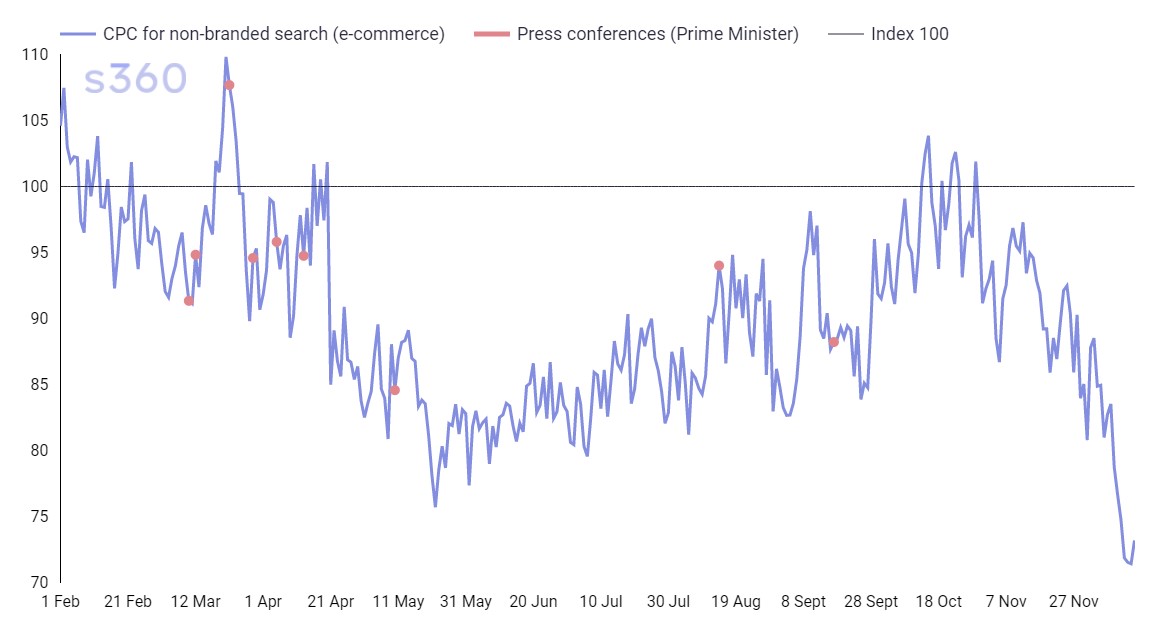 Many ecommerce companies reduced their marketing activities in the months after the first lock-down in March 2020, which resulted in a decrease in click prices, due to the lower competition on the ad market. After May 2020, the click prices has slowly increased to a level that is almost the same as last year. 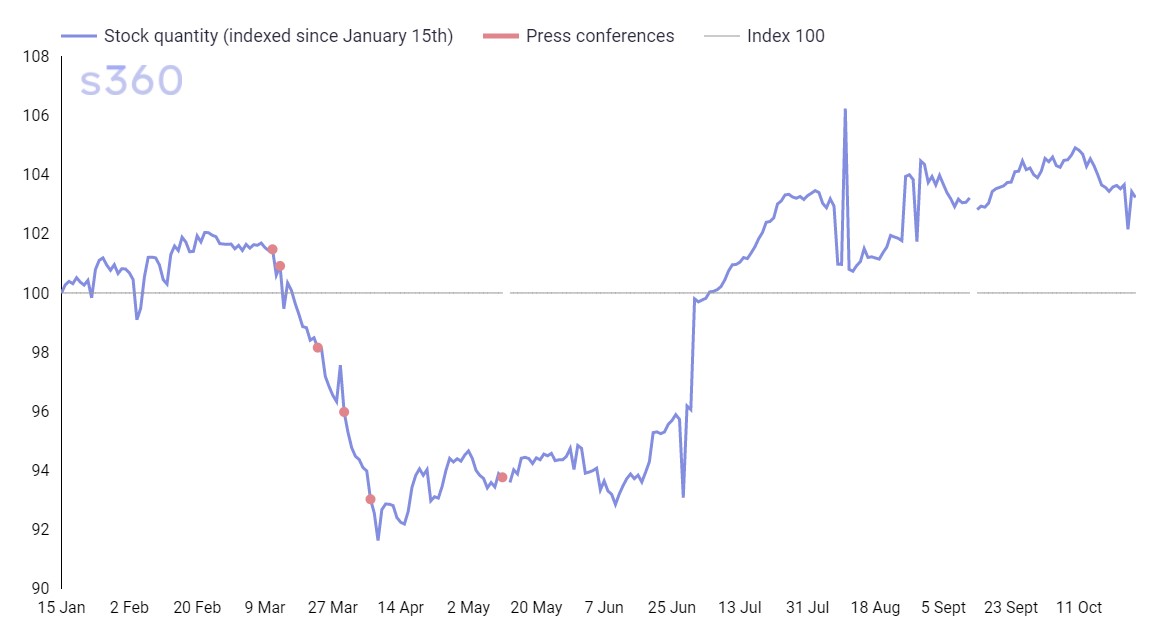 The chart shows the development of stock since January 15, 2020 (Index 100). In general, Danish webshops are still above index 90 compared to January. However, not surprisingly, the high number of orders made in the weeks after March 11 has made its mark on the number of in-stock products at Danish webshops. The effects of the global pandemic can result in a logistics chain under pressure. Especially with a lot of products coming from Asia.

Get a benchmark analysis

Would you like to compare your performance with benchmark numbers from this analysis? Please send an email to Casper Dumont, Business Director at s360: [email protected] or call +45 3139 0715.